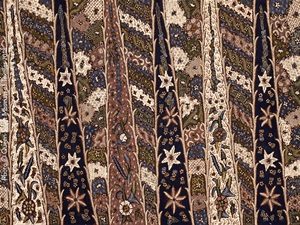 The batik of central Java was divided into court batik and popular batik. Court batik, consisting of the finest quality materials and workmanship, was subjected to restrictions on usage of pattern based on the wearer’s rank. Popular batik could also be of excellent quality and incorporate court patterns, but it was generally adapted in some way so as not to bring harm to the wearer. This harm came when an ordinary person wore a royal pattern. 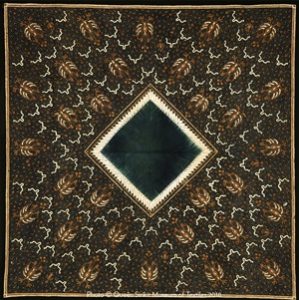 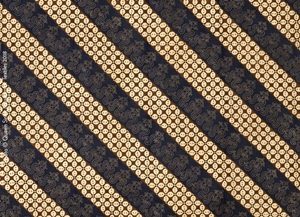 Batik production in West Java is found mainly in areas close to the border with Central Java and has been heavily impacted by batik from principalities of Yogyakarta and Surakarta. West Java coastal batik, on the other hand, reflects a variety of local and foreign influences; Indian, Persian, Chinese and has definite connections with traditions down the coast in central Java as well as with the court batik of Surakarta and Yogyakarta. 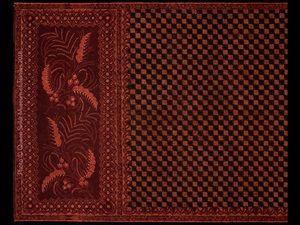 The batik of Cirebon is generally characterized by a light background with the strong color of the Chinese influence motif.

The batik of Indramayu displays strong Indo-Persian influence in one group of patterns and Chinese motif in another, while certain blue-and-white batiks with tiny repetitive geometric designs. In patterns shared with Cirebon, the difference is not always obvious, aside from rougher workmanship.

Garut was famed for a particular ground color called “gumading,” described as “pale yellow like the color of unripe mango fruit.”Its finest patterns were executed in brick red and bright blue on this ground and dyeing one color over the other resulted in black.

Tasikmalaya batik was a propensity for diagonal banding, owing to Central Javanese influence.

The red batik from Cipedes is the result of the interaction between organic dye matter and the chemical composition of local river water.

Batik of Central Java’s north coast was quite different from one another displays strong Chinese, European, foreign Muslim, and Indonesian influences. 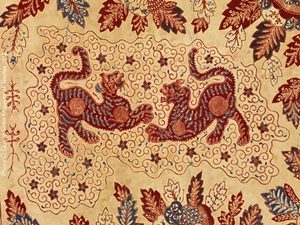 Lasem batik has remarkable dyeing method of red and Chinese influence motif. Lasem batik is usually referred to by its color scheme, not by its pattern. 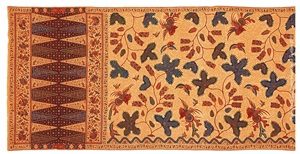 Pekalongan batik was similar to Lasem batik but dyed with more various colors. People of Chinese, European, foreign Muslim, and Indonesian descent were involved in the production in Pekalongan batik. Favored patterns and motifs were also quite distinct, with Central Javanese court influence constituting an important part of Pekalongan batik patterns and Chinese iconography.

Semarang batik from Carolina Josephina Von Franquemont workshop was remarkable, not for perfection of workmanship but rather for interesting new design ideas and motif sources, some of which became standard features of coastal batik such as the play of geometric shapes in the transverse panel and lacelike borders.