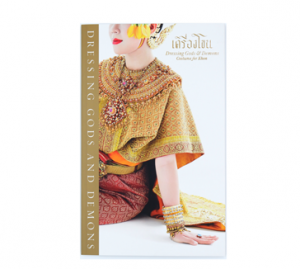 Dressing Gods and Demons: Costume for Khon celebrated the auspicious occasion of Her Majesty Queen Sirikit’s 7th cycle birthday anniversary on August 12, 2016. The exhibition was on view from 4 August 2016 to May 2017 at the Queen Sirikit Museum of Textiles.

Dressing Gods and Demons: Costume for Khon tells the story about Her Majesty Queen Sirikit The Queen Mother’s initiative of the revival of Khon, one of Thailand’s oldest narrative dance forms. Historical evidence shows that Khon performance dates back to the Ayutthaya era. It’s the dance mask performed in the Royal Court and Royal Ceremonies. In 2005, Her Majesty Queen Sirikit The Queen Mother initiated the revival of Khon. Her Majesty assembled a scholarly research team to discover the classic Khon performance details and costumes. After the historical evidence had been collected, Her Majesty commissioned a new theatrical interpretation based on what was known about earlier court versions of Khon through the SUPPORT Foundation. Khon performance was so well-received to both Thais and foreigners.

Dressing Gods and Demons: Costume for Khon also describes about Her Majesty’s initiative of the re-establishing or expanding the weaving, embroidery, mask and jewelry-making workshops necessary to produce all aspects of Khon costumes.