This book serves as the catalog of the Great and Good Friends: Historic Gifts between the Kingdom of Thailand and the United States of America, 1818 – 2018, which is held at Queen Sirikit Museum of Textiles from March 21 – June 30, 2018. This exhibition commemorates the friendship between two countries. The book is written by two curators of the exhibition, Trevor Merrion and William Bradford Smith.

Beginning since the reign of Rama II, there have always been communications between two countries, in term of diplomatic and economic. As the salutation written by U.S. presidents in addressing Siam, “Great and Good Friends”, through letters and distance, the two countries have developed a strong friendship. Moreover, the official gifts exchanged between two countries are the significant proofs as well as the storytellers of how two countries grow relationship through many incidents over two centuries.

This book presents collection of objects displayed in Great and Good Friends exhibition which are mostly official gifts from Kings of Thailand to U.S. presidents as well as gifts from the president to the Kings. These special gifts, including important documents from the past, have never been displayed in public before. 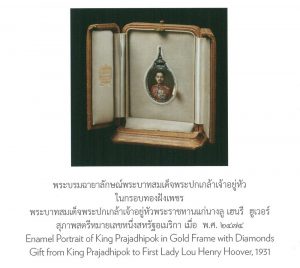 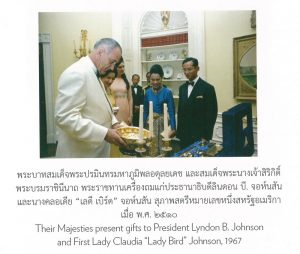 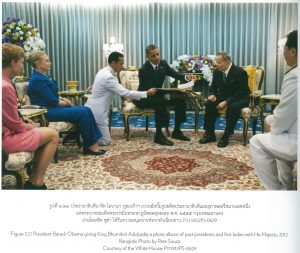 President Barack Obama giving King Bhumibol Adulyadej a photo album of past presidents and first ladies with His Majesty, 2012
Courtesy of the White House